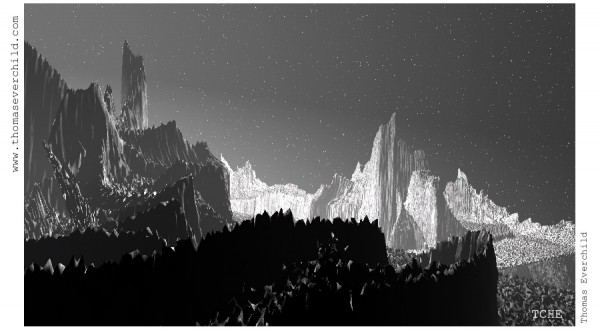 Mountain terrain in the style of 19th century magazine illustration. This is a background setting for illustrations of a ‘Victorian space exploration’, for a serial story.

The jagged moon is a dramatic image that persisted until the Apollo landings, although there were illustrators like Lucien Rudaux who presented a smooth Luna terrain as early as the 1930′s. The artist Chesley Bonestell dominated the vision of the Moon in the 1940′s and 50′s and his spiky Moonscapes influenced many other illustrators. I Hope we’ll find this terrain out there somewhere.

Working in 3D had the advantage of being able to re-light and re-compose an illustration or use one setting for multiple pictures.

Before computers, illustrators constructed models as reference, The lengths to which Frank Hampson went to visualise the world of his ‘Dan Dare’ stories are legendary in English comic circles.

James Nasmyth used photographs of plaster models to produce illustrations of the Luna surface in the 1870′s.